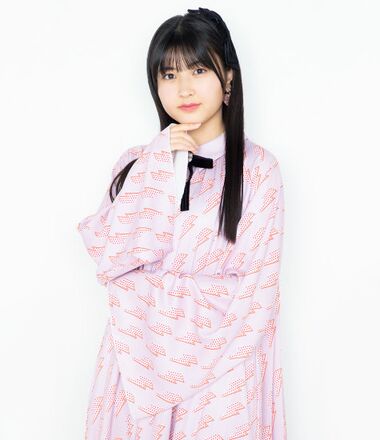 Okamura Minami (岡村美波) is a Japanese pop singer and idol managed by Up-Front Promotion and part of Hello! Project. She is a member of Ame no Mori Kawa Umi and the collective group BEYOOOOONDS.

Okamura Minami acted as a junior model starting as early as 2011, and later joined local dance and vocal unit SunRisa sometime in 2014. In August 2014 Okamura was one of the winners of an audition to become an exclusive model for the girls magazine Dream Girls. Two years later on October 7, 2016 she withdrew from SunRisa.

Okamura was first announced as a member of Hello Pro Kenshuusei through the official website on March 6, 2017, alongside Shimakura Rika, Hibi Marina, Eguchi Saya, Doi Rena, Matsunaga Riai, Yamada Ichigo, and Nakayama Natsume. She made her first live appearance and was formally introduced at at the "Hello Pro Kenshuusei Happyoukai 2017 3gatsu ~Marching!~" event on March 11, 2017.

On June 9, 2018 during the "Hello! Project Kenshuusei Happyoukai 2018 6gatsu ~Niji~" event in Tokyo, it was announced that Okamura would join one of two upcoming groups, featuring previously announced members Takase Kurumi and Kiyono Momohime, along with Maeda Kokoro and Yamazaki Yuhane. The group would be unveiled at a later date in 2018.