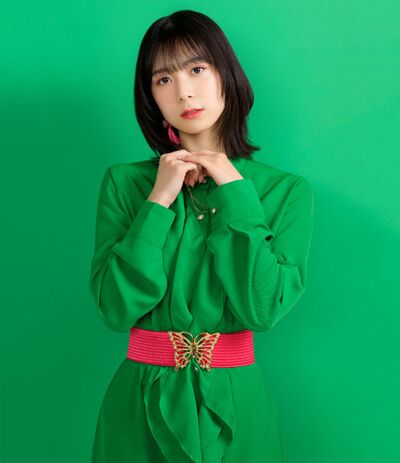 Inoue Rei (井上玲音) is a Japanese pop singer and idol managed by Up-Front Promotion and part of Hello! Project. She is a member of Juice=Juice, and was formerly a member of Kobushi Factory until their disbandment on March 30, 2020.

The disbandment of Kobushi Factory was suddenly announced on January 8, 2020 through the official website. The announcement stated that leader Hirose had been in talks about her graduation since early 2019, and after lengthy discussions with the rest of the members they together came to the conclusion of disbanding as everyone decided to follow their own chosen path. The final single was to be released on March 4th, with the final live show taking place on March 30th at Tokyo Dome City Hall.

In her statement Inoue expressed some frustration, saying she had much more she wanted to experience with Kobushi Factory, but resolved to support everyone in their decisions and try her best. She explained that she loves Kobushi Factory's songs, she loves singing and dancing, and would continue to perform as a member of Hello! Project after the disbandment.

Following the disbandment of Kobushi Factory it was announced that Inoue would join Juice=Juice. The news was revealed by leader Kanazawa Tomoko on April 1, 2020 during a YouTube mini-live promoting Juice=Juice's 13th single, "Pop Music / Suki tte Itte yo". Initially her activities with the group were set to begin following the graduation of Miyamoto Karin on June 3, 2020; however, as a result of the coronavirus outbreak Miyamoto's graduation was postponed until December 2020 and Inoue began activities with the group alongside her. She revealed her member color to be white through a blog post on October 29th.

On June 16, 2021 it was announced that Inoue would begin appearing in S Cawaii magazine as a regular model.