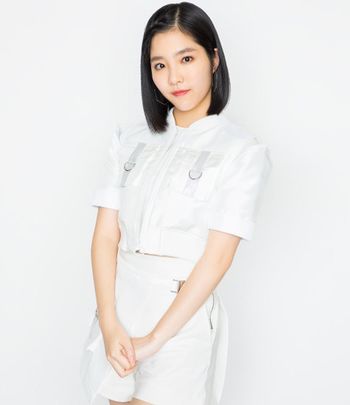 Ichioka Reina (一岡怜奈) is a Japanese pop singer and idol managed by Up-Front Promotion and part of Hello! Project. She is the Leader of CHICA#TETSU and a member of collective group BEYOOOOONDS.

Ichioka Reina first appeared as a finalist in the Morning Musume 11th Generation ~Suppin Utahime~ Audition in the summer of 2012, but was not chosen as a winner. She later passed a separate audition to became a member of the Hello Pro Kenshuusei in November, and was officially introduced at the December "Hello Pro Kenshuusei Happyoukai 2012 ~12gatsu no Nama Tamago Show!~" concert on December 9, 2012. Prior to appearing in the Morning Musume audition she acted as a model for JS Girl and attended singing and dancing lessons before taking part in the 2011 EXILE audition.

On May 5, 2017 an announcement was made at the end of the "Hello! Project Kenshuusei Happyoukai 2017 ~Haru no Koukai Jitsuryoku Shindan Test~ " event revealing that Ichioka Reina and fellow Kenshuusei members Danbara Ruru and Kawamura Ayano would be debuting within Hello! Project in the future pending discussions with their parents, though it was unspecified as to if they would become part of a new group or join existing groups.

A special edition of the Hello! Project webshow "Hello Station" was released on June 26, 2017, announcing the debut placements of the three previously chosen Hello Pro Kenshuusei members and the group transfers of three Country Girls members. During the episode it was revealed that Ichioka Reina would become the leader of a new group, with the remaining members and additional information to be announced at a later date.

An update to the status of two previously announced new groups, including the group Ichioka would lead, was published through the official website on March 30, 2018. The notice revealed that the groups would begin activities between Summer and Autumn 2018 and would have some joint activities. New information on their respective concepts was also shared; Ichioka's group would focus not only on improving singing and dancing, but would be created with the aim of forming a "performance group" that utilizes various forms of physical expression. In addition, new auditions for the groups were also announced with applicant information to be revealed in late April 2018, and a note that members could be chosen from both public applicants and members of Hello Pro Kenshuusei.

Ichioka's appointment to the role of "Oimachi Line 90th Anniversary Ambassador" (大井町線90周年記念アンバサダー) was announced on December 12, 2019 through both the Hello! Project website and a special site created for the anniversary celebrations of the train line. She made an appearance at the departure ceremony, marking the initial opening of the line, on December 25th.