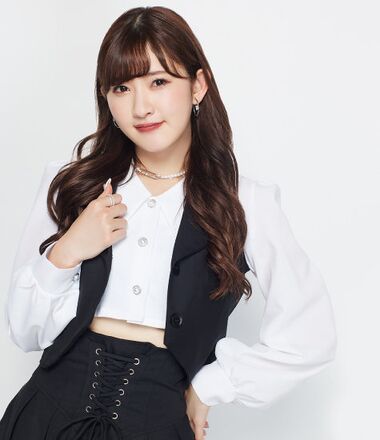 Kawamura Ayano (川村文乃) is a Japanese pop singer and idol managed by Up-Front Promotion and part of Hello! Project. She is a sixth generation member and current sub-leader of ANGERME.

Kawamura Ayano made her first notable appearances in 2008 and 2009, appearing in Imagine Musical stage productions such as "Little Women" in July 2008 and "Anne of Green Gables" in August 2009, as well as local commercials. On November 24, 2009 she was appointed the title of Osakan PR Ambassador. The next month on December 9th she released her first major and only solo single, a promotional cover of the 1991 Osakan PR campaign song "Osakana Tengoku 2010". She went on to also recieve the title of Kochi Prefecture Tourism Envoy along with the local Kochi prefecture based indie idol group Hachikin Girls.

After appearing with the group at multiple events as part of their tourism promotions Ayano participated in the Hachikin Girls Member Audition and later became a member of Hachikin Girls on April 17, 2011. Her graduation from Hachikin Girls was announced several years later on June 6, 2016, where she stated her desire to pursue a dream she'd held since early childhood. The graduation officially took place on June 12th.

Ayano was revealed to be a new member of the Hello Pro Kenshuusei through an announcement on the official website on August 17, 2016, after having failed the third round of the Morning Musume'16 Shinseiki Audition. She made her first live appearance at the "Hello! Project Kenshuusei Happyoukai 2016 9gatsu ~SINGING!~" concert on September 4th.

On May 5, 2017 an announcement was made at the end of the "Hello! Project Kenshuusei Happyoukai 2017 ~Haru no Koukai Jitsuryoku Shindan Test~" event revealing that Kawamura Ayano and fellow Kenshuusei members Ichioka Reina and Danbara Ruru would be debuting within Hello! Project in the future pending discussions with their parents, though it was unspecified as to if they would become part of a new group or join existing groups.

A special edition of the Hello! Project webshow "Hello Station" was released on June 26, 2017, announcing the debut placements of the three previously chosen Hello Pro Kenshuusei members and the group transfers of three Country Girls members. During the episode it was revealed that Ayano would become a new member of ANGERME, along with Funaki Musubu. On November 4, 2020 it was announced that Kawamura had been appointed the "Yuzu Activity Ambassador" for the shop Marugoto Kochi(まるごと高知) in her hometown of Kochi Prefecture; the collaboration included the release of a special yuzu gelato with packaging featuring a character designed by her.

On February 15, 2021 Kawamura became the first person to be appointed the role of "Kochi City PR Ambassador". The city requested that she, as a representative and citizen from Kochi, offer advice and information to the young people of the city, especially those nearing the age they may consider moving elsewhere for employment or the furthering of education. On February 22 she was announced to be the image character for the NHK Kochi Broadcasting Station's disaster prevention campaign.

It was announced on July 10 that Kawamura had become the first ever woman, and ninth person in Japan overall, to be certified and earn her license after passing the "1st Class Maguro Dismantling" examination.