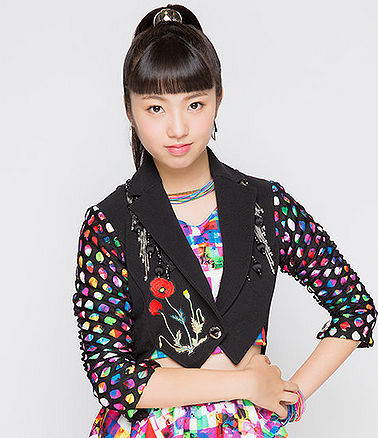 Aikawa Maho (相川茉穂) was a Japanese pop singer and idol managed by Up-Front Promotion and part of Hello! Project. She was a third generation member of ANGERME.

Aikawa Maho joined Hello! Project as a member of the Hello! Pro Kenshuusei in 2014, where her first appearance was in official goods released in May 2014. She was announced as a 3rd generation member of S/mileage at the October 4, 2014 showing of the "SMILE FANTASY!" stage play, along with Murota Mizuki and Sasaki Rikako.

On January 11, 2017, it was officially announced that Aikawa Maho had been diagnosed with a panic disorder that caused her to experience panic attacks, headaches, trouble breathing, and dizziness; the announcement also stated that she would immediately go on hiatus to undergo treatment. In her personal statement Aikawa wrote that she hoped she could help do away with some of the stigma attached to both panic conditions and mental health. An update to her status was released on March 3rd, stating that she would continue her hiatus until at least the middle of May.

A second update from the official director of Up-Front Promotion was released on July 12th that reaffirmed Aikawa's intention to return to her activities with ANGERME and Hello! Project, but she would have to continue her hiatus and treatments until the end of ANGERME's Fall 2017 tour, after which they would discuss options with her family while taking into account her progress and a diagnosis from her doctor. In her own statement included in the July update Aikawa revealed that from January to March she was unable to leave her home, but her attacks had become less frequent over the course of half a year as she slowly ventured out and eventually was able to take University entrance exams. Her doctor said she would be able to live daily life without too much trouble, but would still need to be cautious of situations that induced high stress or put her under extreme pressure; because of this she asked that everyone wait for her as her treatments continued.

A final update was posted to the official Hello! Project website on December 31, 2017, revealing Aikawa's decision to graduate from ANGERME and Hello! Project after discussing her future with her family. Both the company and Aikawa apologized for not being able to meet the goal of returning and asked that everyone continue to support ANGERME. Aikawa wrote that though her attacks had decreased and she was able to attend University, she decided to graduate in part because she feared that attacks during activities would return things to the way they were previously, and there was no way for her to predict when her condition would effect her. She further stated that she did not want to continue to make people wait or to be a bother to her fellow members, so while taking her future into consideration she chose the path of graduation.