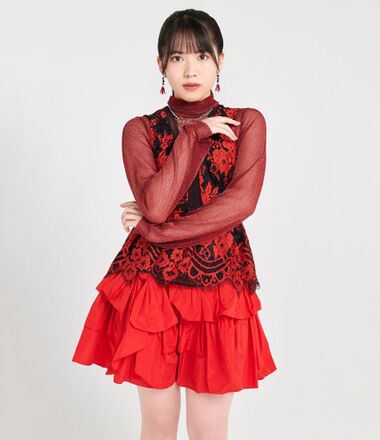 Tamenaga Shion (為永幸音) is a Japanese pop singer and idol managed by Up-Front Promotion and part of Hello! Project. She is a ninth generation member of ANGERME.

Tamenaga Shion became a member of Beam Idol School in April 2015, and graduated several months later on November 22nd. She made her screen debut in September 2015, playing young Tokiko in the "Suguru Hi no Yamaneko" film. She joined the idol duo ☆ARION☆ on December 24th and continued until the unit's disbandment on December 31, 2016. While she was in the group she also began pursuing solo idol activities under the name OTO♡.

Tamenaga participated in the "Morning Musume '16 Shinseiki Audition", but failed to pass the third round. She ceased solo OTO♡ activities on October 31, 2017. Prior to halting her activities, over the summer of 2017 she became a finalist in the "Hello! Project Shin Member Audition". When it was announced that no winners would be chosen from the audition, she and several other finalists accepted an invitation to join Hello Pro Kenshuusei. They made their first live appearance and were officially introduced at the "Hello! Project Kenshuusei Happyoukai 2017 12gatsu ~Conti→New!~" concert on December 10, 2017.

Tamenaga received the Dance Award for her performance of Goto Maki's "Daite yo! PLEASE GO ON" at the "Hello! Project Kenshuusei Happyoukai 2020 ~Natsu no Koukai Jitsuryoku Shindan Test~" event on July 26, 2020.

On November 2, 2020 Tamenaga was revealed to be one of three new ninth generation members of ANGERME, alongside audition winners Kawana Rin and Matsumoto Wakana. The reveal was made through a special premiere on the official group YouTube channel. During the reveal her member color was also announced to be pink. Their first performance as part of the group would take place on December 9, 2020 at sixth generation member Funaki Musubu's graduation concert, titled "ANGERME Concert 2020 ~Kishoutenketsu~ Funaki Musubu Sotsugyou Special".