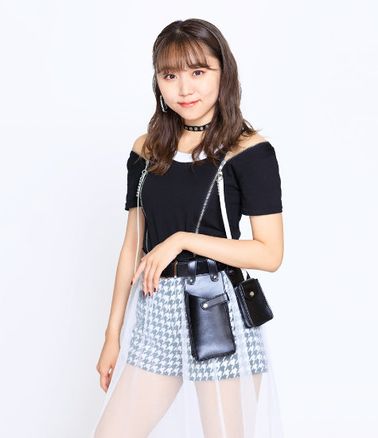 Murota Mizuki (室田瑞希) is a Japanese pop singer and talent. She was formerly part of Hello! Project as a third generation member of ANGERME.

Murota Mizuki joined Hello! Project as a member of the Hello! Pro Kenshuusei in 2012, and was officially introduced at the "Hello Pro Kenshuusei Happyoukai 2012 ~3gatsu no Nama Tamago Show!~" concert on April 1, 2012. Prior to joining she participated in the 2011 S/mileage audition, where her number was #1406, and later as a member participated in the Morning Musume 11th Generation ~Suppin Utahime~ Audition in 2012.

She was announced as a 3rd generation member of S/mileage at the October 4, 2014 showing of the "SMILE FANTASY!" stage play, along with Sasaki Rikako and Aikawa Maho.

Murota announced her graduation from ANGERME and Hello! Project on January 22, 2020, to take place on March 22nd during the ANGERME Premium show of the "Hello! Project Hina Fes 2020" concerts. She apologized for the short notice in her statement, explaining that she'd already started thinking of graduating more than a year prior and only made her choice after discussing her situation with various people. She talked about how she enjoyed expressing herself, and her desire to start fresh in learning about expressiveness and to challenge herself to a wide variety of things, including music and acting.

On January 28, 2021 it was announced that Murota chose to leave Up-Front Promotion upon the conclusion of her contract in December 2020, with the intention of returning to entertainment activities sometime in the future when she was ready.