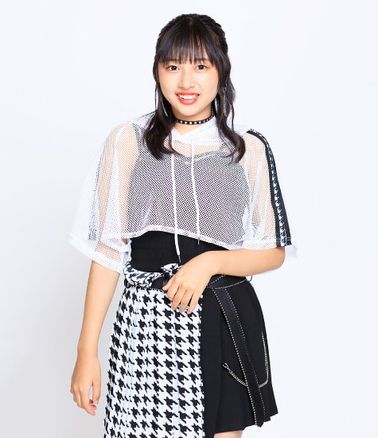 Oota Haruka (太田遥香) is a Japanese pop singer and idol managed by Up-Front Promotion and part of Hello! Project. She was a seventh generation member of ANGERME.

Before taking the Hello! Project "Hokkaido Gentei" Member Audition in 2015, Oota Haruka was enrolled at the Theatre Academy in Sapporo. While attending the academy she was a member of two units; Ribbon Girls, which helped promote the local Hokkaido drink Ribbon Napolin, and Clione. The following year on July 30, 2016 she was officially introduced as a member of Hello Pro Kenshuusei Hokkaido during the "Hello! Project 2016 Summer ~Sunshine Parade~" concert in Sapporo, alongside Satou Hikari, Ishiguri Kanami, Kawano Minori, Kitagawa Ryou, Kudou Yume, and Yamazaki Mei.

On November 23, 2018 during the "ANGERME 2018 Aki Denkousekka" concert finale taking place at Pacifico Yokohama, Oota Haruka and Ise Reira were revealed to be new seventh generation members of ANGERME. Their activities with the group would officially begin with the Hello! Project 2019 WINTER concert tour.

On February 28, 2020 it was announced that Oota was placed on indefinite hiatus from all activities by her own request after admitting to breaching Hello! Project rules. The announcement noted that the office takes the matter seriously and would offer guidance from the basics while giving her time to reflect, with her return to activities to be announced at an undetermined date. Oota stated she would take time to learn from her mistake and come back with improved self-awareness and a higher level of professionalism. Several months later on October 14, 2020 it was announced that Oota had ended her time with ANGERME, but still wanted to eventually return to Hello! Project; she would start from scratch and work her way back. After the announcement her profile was moved from ANGERME's group page to the UP-FRONT PROMOTION artist list.