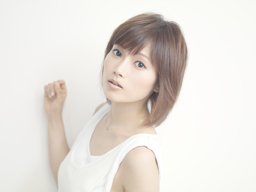 Abe Natsumi promoting Ameagari no Niji no You ni (2010)

Abe Natsumi is one of the five original members of Morning Musume. She often took the lead in songs, on occasion singing the entire lead vocal with the other girls acting as backup singers. In 2004, she graduated from the group to pursue a solo career.

In 2003, Abe teamed up with Yosumi Keiko, a former member of Rokusenmon, as a so-called "mother and daughter" duo and released a single to prepare her for her solo efforts. To date she has released two albums, one mini album, and ten solo singles.

In late 2004 she was temporarily suspended for plagiarism, but as of early 2005, she is once again recording and performing. The song that was already recorded and supposed to be released as a single was Nariyamai Tambourine, which never was publicly released because Abe was suspended. The song was only released in 2008 in Abe's Best album as a new track.

Abe has participated in many Hello! Project shuffle units and subgroups, the latest being Morning Musume Tanjou 10nen Kinentai.

On November 16, 2007, it was announced that Abe would be collaborating with ºC-ute member Yajima Maimi. They will release the single 16sai no Koi Nante on January 16, 2008. It will be the first Hello! Project single of 2008.

On March 31, 2009, Abe Natsumi graduated from Hello! Project with the rest of the Elder Club.

In 2014, she changed directions in her music style. Going from releasing Jpop songs to venture into the world of classical music. In 2016, she became a mother of a boy.