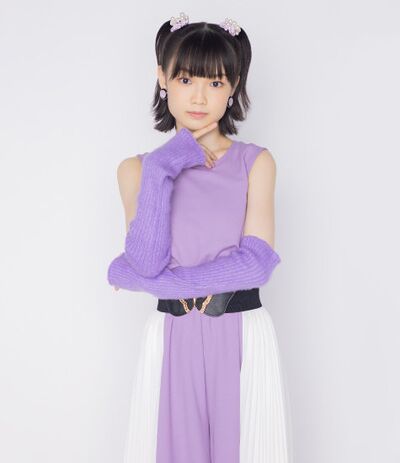 Yamazaki Mei (山﨑愛生) is a Japanese pop singer and idol managed by Up-Front Promotion and part of Hello! Project. She is a fifteenth generation member of Morning Musume.

Yamazaki Mei auditioned to become a Ciaogirl, a model for Ciao magazine, sometime in 2014. She participated in the "Hello! Project "Hokkaido Gentei" Member Audition" between June and July 2015, and on June 30, 2016 was officially introduced as a member of Hello Pro Kenshuusei Hokkaido during the "Hello! Project 2016 Summer ~Sunshine Parade~" concert in Sapporo, alongside Oota Haruka, Satou Hikari, Ishiguri Kanami, Kawano Minori, Kitagawa Ryou, and Kudou Yume.