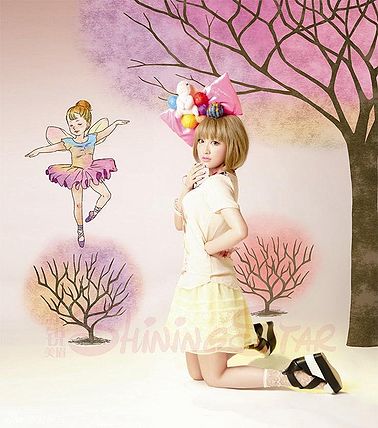 Qian Lin (钱琳), also known by her stage name Linlin (リンリン), is a Chinese performer and producer under Ocean Butterflies International. She was previously a Japanese pop singer and idol managed by Up-Front Agency and part of Hello! Project as an eighth generation member of Morning Musume.

Linlin was first scouted by a Chinese TV station when she was in second grade of elementary school. She has since appeared in various dramas and as a host for other shows.

After being introduced to Tsunku, she then joined Hello! Project as a member of Hello! Pro Egg. She was featured as a back dancer in Hello! Project's 2007 Winter concert tour. In March of the same year, she and Junjun would join Morning Musume as members of the eighth generation, thus making them the first members of the group to come from outside Japan. They made their concert debut on May 6, 2007 at Morning Musume's 2007 Spring concert tour.

On August 8, 2010, it was announced on Tsunku's blog that Junjun, Linlin, and Kamei Eri would graduate from Morning Musume. On December 15th, 2010, Linlin, along with fellow members Junjun and Kamei Eri, graduated from Morning Musume and Hello! Project on the final date of their autumn Rival Survival tour. The concert, held at Yokohama Arena, was broadcast live in 3D.

After graduating from Morning Musume she returned to China, and released her first solo single in 2013. She later began producing the Chinese idol group Idol School between 2015 and 2016, including writing and composing songs for the group.

In late June 2016 LinLin revealed that she had been married since November 2014 and had given birth to her first child in September 2015. She made the reveal through a Japanese teleivision show and later her personal blog, stating that she chose the show because of how precious her time as a member of Morning Musume was to her, and expressed thanks to the fans that supported her to this point in her life.