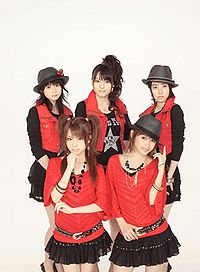 High-King is a Japanese pop girl group produced by Up-Front Agency and part of Hello! Project.

High-King was formed in June 2008 for Morning Musume's newest stage musical, Cinderella. Their debut single was used as a theme song for the musical and was performed by Morning Musume during the mini concert after each performance. Initially meant to be a special unit, High-King was only active for that period. However, when Hello! Project released a special cover album in the summer of 2009, High-King was brought back as one of the seven special units that would feature all the members. High-King was the only unit to not undergo a line-up change.