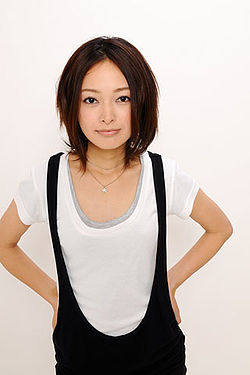 Ichii Sayaka is a former member of Morning Musume and CUBIC-CROSS, and currently a TV talent and planning to debut as an actress.

Ichii Sayaka was a member of Morning Musume. She joined the group in May 1998 with fellow second generation members Yaguchi Mari and Yasuda Kei. She graduated in May 2000 to continue her education.

In late 2001 she released a collaboration album with Nakazawa Yuko and the same year she rejoined the music business with CUBIC-CROSS, which was Ichii Sayaka (vocals), Taisei (keyboards) & Yoshizawa Naoki (guitar). Taisei was also the producer for the group and he used to play keyboards in Sharan Q. Ichii retired from the music business at the end of 2003, married Yoshizawa Naoki, and had a child.

She joined a Ranves Management agency in February 2009, and on August 24 it was announced she'd return to the show business on the next day, on which her official blog opened and an interview with FLASH magazine was published. On August 30 she returned to TV in a TBS show called Sunday Japon, and on September 5 she appeared as a model in Tokyo Girls Collection (Yoyogi Stadium). Her agency stated "She's returning as a talent with a bright and cheerful character, cultivated by her time in Morning Musume, that anybody would love. In the future, she'll be an actor with special and rare talents." The FLASH interview revealed that her husband and her two children have supported her in her comeback decision, and that she's realized she can't be an idol anymore, and doesn't want to be a mama-dol either, and that she hasn't been in contact with Morning Musume members but she would like to appear on TV shows with them.

It was revealed in June of 2011 that Ichii Sayaka divorced her husband, former guitarist Yoshizawa Naoki, on May 23, 2011 for unknown reasons. In August 2012 it was announced that Sayaka was now married again, to an unknown man, and pregnant with her third child.