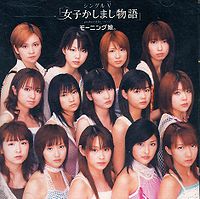 This is the last Morning Musume single to feature Tsuji Nozomi and Kago Ai.

There are currently six recorded versions of "Joshi Kashimashi Monogatari" found in Morning Musume and Hello! Project's discography. These versions are:

As the nature of the song depends on the members singing it, the song's verses will constantly change. Several exclusive versions are performed at concerts, featuring newly written verses, even by artists other than Morning Musume.