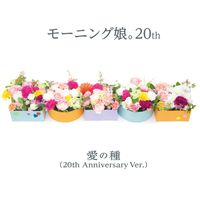 "Ai no Tane" is the demo single by Morning Musume. Producer Tsunku challenged the five girls who lost the Sharam Q audition to sell 50,000 copies of this song they recorded together to get a record deal. It was released on November 3, 1997. The single hit 50,000 sold by November 30th and the rest is history.

An updated version of the song titled "Ai no Tane (20th Anniversary Ver.)" featuring the first generation members and the current members was released as a digital single on November 3, 2017 under the name Morning Musume 20th, in commemoration of the group's 20th anniversary.

There are currently five recorded versions of "Ai no Tane" found in Morning Musume and Hello! Project's discography. These versions are: