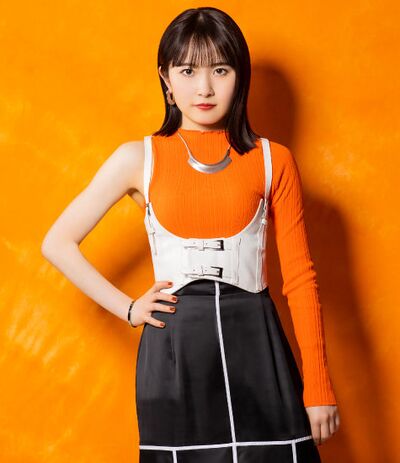 Morito Chisaki (森戸知沙希) is a Japanese pop singer and was an idol managed by Up-Front Promotion and part of Hello! Project. She was a fourteenth generation member of Morning Musume and was previously a member of Country Girls.

Morito Chisaki was a member of local idol group CoCoRo Gakuen between 2011 and 2014, she participated in the 2014 Morning Musume '14 (Golden) Audition! during the spring-summer season, but failed to become a member. On November 1, 2014 she graduated from CoCoRo Gakuen, and several days later on November 5th Chisaki was revealed as a member of Country Girls, the revival of past Hello! Project group Country Musume, alongside Hello Pro Kenshuusei members Yamaki Risa and Inaba Manaka, and fellow failed auditionees Shimamura Uta and Ozeki Mai.

On June 24, 2016 it was announced that Chisaki would be the new embassador of her home prefecture, Tochigi.

On June 9, 2017, it was suddenly announced that Country Girls members Chisaki, Nanami, and Musubu would transfer their main activities and become members of other Hello! Project groups. It was further stated that Country Girls would be relegated to only being active during school holidays. Later the same month on June 26th a special edition of the Hello! Project webshow "Hello Station" was released, announcing the group transfers of the three Country Girls members and the debut placements of three previously chosen Hello Pro Kenshuusei. During the episode it was revealed that Chisaki would become a new member of Morning Musume. Her position within a generation was not stated in the initial video reveal, but sub-leader Iikubo Haruna later referred to her as the 14th generation member on her blog.

Morito's graduation from Country Girls, alongside the graduations of all other members and the hiatus of the group, was announced on October 18, 2019. Within her announcement she revealed she would continue in Hello! Project as the 14th generation member of Morning Musume. The graduation took place on December 26, 2019 at LINE CUBE SHIBUYA. On February 5, 2020 it was announced that Morito was diagnosed with vocal cord nodules after experiencing difficulty with her voice. Her status would be monitored and she would temporarily refrain from singing during concerts and events until a follow-up examination.

Morito announced her graduation from Morning Musume on February 28, 2022. She would graduate at Nippon Budokan on June 20, during Morning Musume's Hello! Project 2022 Spring CITY CIRCUIT solo sub tour "Morning Musume. '22 CONCERT TOUR ~Never Been Better!~". She stated her intention was to go abroad to study English for a year and a half, after which she would return to continue activities under Up-Front. Originally she wanted to graduate in 2021, but postponed her plans because of the COVID-19 pandemic.