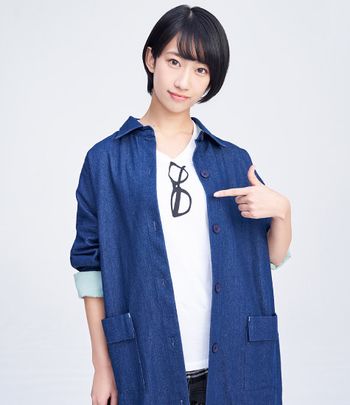 Maeda Kokoro (前田こころ) is a Japanese pop singer and idol managed by Up-Front Promotion and part of Hello! Project. She is a member of Ame no Mori Kawa Umi and the collective group BEYOOOOONDS.

Maeda Kokoro participated in the Morning Musume 12th Generation Audition, but failed to pass. She was later announced as a member of Hello Pro Kenshuusei through the official website on April 27, 2015, alongside Ono Mizuho, Nakano Rion, Yanagawa Nanami, Akiyama Mao, Kanatsu Mizuki, Kasahara Momona, and Okamoto Honoka. She made her first live appearance and was formally introduced at the "Hello Pro Kenshuusei Happyoukai 2015 ~Haru no Koukai Jitsuryoku Shindan Test~" event on May 4, 2015.

On June 9, 2018 during the "Hello! Project Kenshuusei Happyoukai 2018 6gatsu ~Niji~" event in Tokyo, it was announced that Maeda would join one of two upcoming groups, featuring previously announced members Takase Kurumi and Kiyono Momohime, along with Yamazaki Yuhane and Okamura Minami. The group would be unveiled at a later date in 2018.