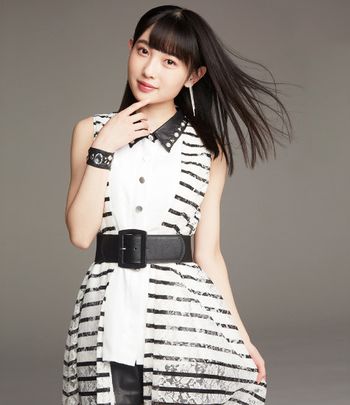 Yanagawa Nanami (梁川奈々美) is a Japanese pop singer and was an idol managed by Up-Front Promotion and part of Hello! Project. She was a member of both Juice=Juice and Country Girls.

Yanagawa Nanami was first introduced as a member of Hello! Pro Kenshuusei through an announcement on the official website on April 27, 2015. After joining she participated in the Morning Musume 12th Generation "Golden Audition", but failed.

She and fellow trainee Funaki Musubu were announced as two new members of Country Girls on November 5, 2015 during the Country Girls 1st Anniversary Live event held at the Shinjuku ReNY venue.

On June 9, 2017, it was suddenly announced that Country Girls members Chisaki, Nanami, and Musubu would transfer their main activities and become members of other Hello! Project groups. It was further stated that Country Girls would be relegated to only being active during school holidays. Later that month on June 26th a special edition of the Hello! Project webshow "Hello Station" was released, announcing the group transfers of the three Country Girls members and the debut placements of three previously chosen Hello Pro Kenshuusei. During the episode it was revealed that Yanagawa would become a member of Juice=Juice, along with Danbara Ruru.

Yanagawa Nanami's intention to graduate from Juice=Juice, Country Girls, and Hello! Project as a whole was announced on November 2, 2018. Her graduation would take place on March 11, 2019. In her statement she stated her desire to step away from "idol" and to grow as a person, as "Yanagawa Nanami", and mentioned furthering her eduation while finding her new dream.