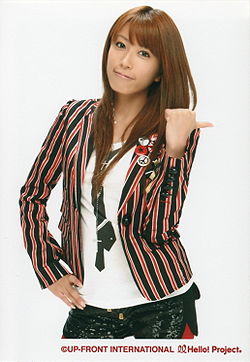 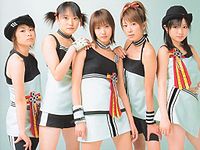 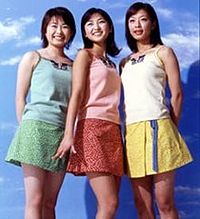 Country Musume (カントリー娘。) is a former Hello! Project unit with a theme of country girls from Hokkaido. The group was revived under the name Country Girls in 2014.

Country Musume was formed in 1999 by Tsunku and the group's original producer Tanaka Yoshitake. The four-week-long audition cycle included not only voice and dance lessons but a physical challenge: working on the Hanabatake farm in souther Hokkaido. The purpose of the physical challenge was to determine how responsible the girls were and how well they worked as a team to fit the image of country girls from Hokkaido, although the auditions were open to girls from all of Japan, not just Hokkaido.

At the end of the audition, three members were selected: Toda Rinne (from Hokkaido), Kobayashi Azusa (from Tokyo), and Yanagihara Hiromi (from Chiba). Following the trend of their sister group, Morning Musume, Kobayashi, as the oldest member, was given the title as leader of the group. After working on their debut single with plenty of support from other singers such as Moritaka Chisato and Nakazawa Yuko, they were able to successfully record and complete the promotional video. However, tragedy struck the group soon after their work seemed to be finished. On July 17, 1999, Hiromi died in an automobile accident, just days before their first single was released, at the age of 19. Hiromi's family was given the decision to whether Country Musume should continue their work and release their single as scheduled, and they approved. A month later, Azusa decided to leave the group for personal reasons. After a two-month hiatus, Rinne started performing as a solo act, but under the Country Musume name. After two singles, she went from being a solo artist to a group leader, as she was joined by a new member, Kimura Asami in 2000.

However, by the end of the year, producer Tanaka decided to give Tsunku the producer's position of the group, due to his difficulty in finding more members to join Rinne and Asami. The first change that Tsunku made was to "lend" a member of Morning Musume into the group. In April 2001, Ishikawa Rika was added and the group became known as Country Musume ni Ishikawa Rika. This was to be a temporary change at first (the plan was to cycle Morning Musume members), but soon decided to keep Ishikawa in the group due to the group's sudden rise in popularity. Early in 2002, Tsunku made yet another change by adding Hokkaido native Satoda Mai, a finalist from the Morning Musume 4th-generation audition. Later that same year Rinne graduated from the group and Hello! Project to pursue a career within Up-Front Agency as a stage actress. Asami became the new leader of the group.

In summer 2003, Saitou Miuna (of Shizuoka) joined Country Musume, and Rika's time in the group was over. Tsunku revived the idea of cycling Morning Musume members through the group. This time, Hokkaido natives Konno Asami and Fujimoto Miki were selected. The group was then called Country Musume ni Konno to Fujimoto.

On November 25, 2006, it was announced that Asami and Miuna would be graduating from Country Musume and Hello! Project together on January 28, 2007, at the final performance of Hello! Project 2007 Winter ~Shuuketsu! 10th Anniversary~. For the second time Country Musume became a one-member unit; Satoda continued performing as Satoda Mai (Country Musume) until the Elder Club graduation on February 1, 2009. The group was previously inactive.

An audition for new members was announced at the Hello! Project concert and through Up-Front's official YouTube channel by former member Satoda Mai, on February 12, 2014, to take place until March 31, 2014. The audition was open to girls ages 10-17 across the country. However on August 7th, it was announced that there was no winners from this audition. Later on November 4, 2014 it was announced that the group was being revived with a new name, Country Girls, and would feature Satoda Mai as a Supervisor.