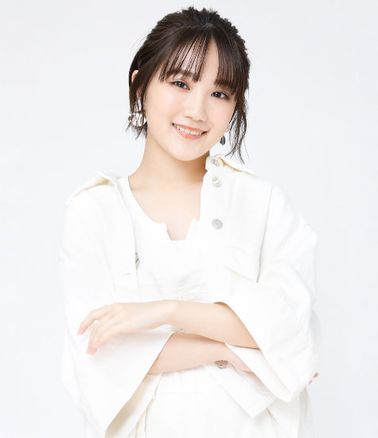 Funaki Musubu (船木結) is a Japanese pop singer and idol managed by Up-Front Promotion and was part of Hello! Project. She was a sixth generation member of ANGERME and was previously a member of Country Girls.

Funaki Musubu joined Hello! Project as a member of Hello! Pro Kenshuusei in 2013, first appearing in an official introduction video on September 22nd. Prior to joining she was a finalist in the Morning Musume 12th Generation "Mirai Shoujo" Audition.

She and fellow trainee Yanagawa Nanami were announced as two new members of Country Girls on November 5, 2015 during the Country Girls 1st Anniversary Live event held at the Shinjuku ReNY venue.

On June 9, 2017, it was suddenly announced that Country Girls members Chisaki, Nanami, and Musubu would transfer their main activities and become members of other Hello! Project groups. It was further stated that Country Girls would be relegated to only being active during school holidays. Later the same month on June 26th a special edition of the Hello! Project webshow "Hello Station" was released, announcing the group transfers of the three Country Girls members and the debut placements of three previously chosen Hello Pro Kenshuusei. During the episode it was revealed that Musubu would become a new member of ANGERME, along with Kawamura Ayano.

Funaki announced her graduation from Country Girls, ANGERME, and Hello! Project on October 18, 2019. She would graduation from Country Girls on December 26, 2019 alongside the group's remaining members as the group entered a cease on activities, and from ANGERME and Hello! Project in March 2020. Following her graduation she would take a hiatus from entertainment activities. In her announcement she stated her desire to pursue dance in the future, though she did not say she would stop singing, as she'd always had an interest in expressing herself and wanted to continue doing so.

It was announced on January 22, 2020 that Funaki's graduation would be postponed to the end of the "ANGERME Live Tour 2020 Fuyu Haru ROCK ON! LOCK ON!", due to fellow member Murota Mizuki announcing her own graduation to take place on March 22nd. Funaki's graduation was again postponed, this time indefinitely due to circumstances regarding the coronavirus outbreak. A special concert, titled "ANGERME Concert 2020 ~Kishoutenketsu~ Funaki Musubu Sotsugyou Special", was later scheduled to take place on December 9, 2020 at Nippon Budokan in Tokyo.