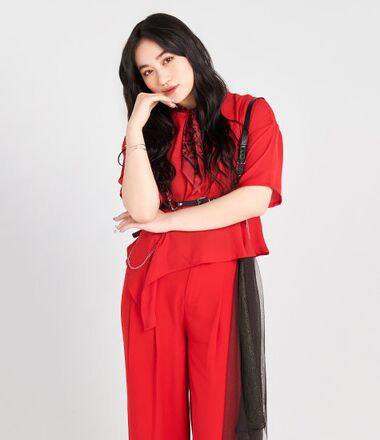 Sasaki Rikako (佐々木莉佳子) is a Japanese pop singer and idol managed by Up-Front Promotion and part of Hello! Project. She is a third generation member of ANGERME.

Prior to joining Hello! Project, Sasaki Rikako was a member of the earthquake support idol group SCK Girls and participated in the Morning Musume 11th Generation ~Suppin Utahime~ Audition. She was introduced as a new Hello! Pro Kenshuusei member at the March "Hello! Pro Kenshuusei Happyoukai 2013 ~3gatsu no Nama Tamago Show!~" concert. On May 31, 2014 she became a model audition winner for the magazine "Pichi Lemon" and continued appearing regularly through October 2015.

She was announced as a 3rd generation member of S/mileage at the October 4, 2014 showing of the "SMILE FANTASY!" stage play, along with Murota Mizuki and Aikawa Maho. The March 2016 issue of "Seventeen" magazine, released on February 1, introduced her one of the new regular ST models. Sasaki announced that she had graduated from her role as an ST model on March 1, 2020. The following year on June 11, 2021 she was revealed to be an exclusive model for "CanCam" fashion magazine.

Sasaki revealed through her blog on September 10, 2021 that she would be named a Minato Kesennuma Ambassador for her hometown, Kesennuma city. As an ambassador she would promote the region by spreading information on culture, history, food, nature, and various other attractions.