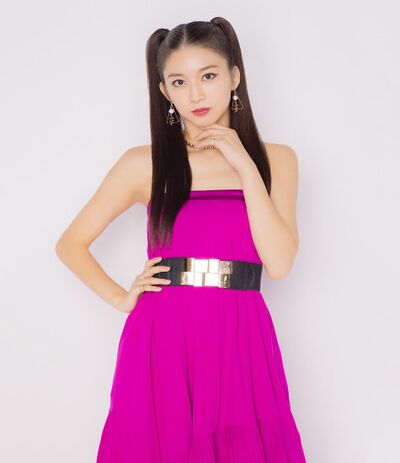 Makino Maria (牧野真莉愛) is a Japanese pop singer and idol managed by Up-Front Promotion and part of Hello! Project. She is a twelfth generation member of Morning Musume.

Makino Maria joined Hello! Project as a member of the Hello! Pro Kenshuusei in 2012, and was first introduced at the December "Hello Pro Kenshuusei Happyoukai 2012 ~12gatsu no Nama Tamago Show!~" concert. Prior to joining she participated in the Morning Musume 11th generation audition.

She was chosen from Morning Musume's 12th generation "Golden Audition" to join the group on September 30, 2014, along with Ogata Haruna, Nonaka Miki, and Haga Akane. Makino's image color was officially changed from light pink to pink, the color formerly held by her respected 6th generation senior Michishige Sayumi, on July 12, 2019.

On February 2, 2021 it was announced that Maria would begin writing a new column in the official Hokkaido Nippon-Ham Fighters magazine "FORTE". The first edition of the column, titled "Fighters LOVErin Desu", was published in the issue released on February 15th.