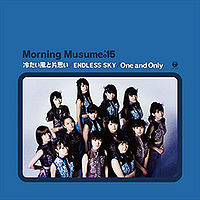 "Tsumetai Kaze to Kataomoi / ENDLESS SKY / One and Only" is the sixtieth single released by Morning Musume, and their third as Morning Musume '15. The single was released in limited editions A, B, C, and regular editions A, B, C. Limited editions A, B, and C came with bonus DVDs. The limited editions and the first press of the regular edition came with a serial number card which, when entered in a lottery, could win a ticket to one of the single's launch events. A special box set was also released, including all versions of the single and the chance to attend one of several events. A couple months later in May, a vinyl version was released with an exclusive track.