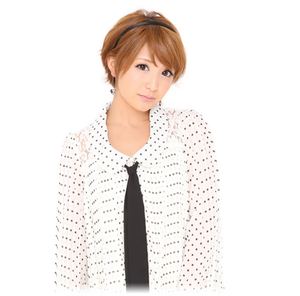 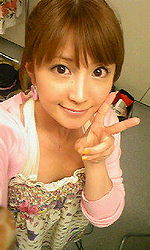 Yaguchi Mari (矢口真里) is a japanese singer and Talento.

Early on in the group Yaguchi was often perceived as being "the short one" as she did not stand out a lot, but by the time 4th generation joined she had become one of the most active members of the group. Her most famous phrase is "Sexy Beam!" one of her solo lines from Morning Musume's "Koi no Dance Site" single, and she was asked jokingly in Joshi Kashimashi Monogatari, "When will your real sexy beam come out?". The "Sexy beam!" line has made its way around fans and fellow musicians alike.

Yaguchi became Morning Musume's sub-leader in May 2003, after the graduation of Yasuda Kei. After the graduation of Iida Kaori in January 2005, Yaguchi became leader and Yoshizawa Hitomi would support her as sub-leader. However in April 2005, it was reported by tabloid magazine FRIDAY that Yaguchi was in a relationship with actor Oguri Shun. She said she had "betrayed [her] position as an idol" and that she "want[ed] to move on with [her] career as an adult." As such, Yaguchi resigned from Morning Musume without a graduation ceremony. Yaguchi and Oguri have reportedly broken up since April 2006.

When she graduated from Morning Musume she was the last person to join before the year 2000 (Kaori Iida had left nearly 2 months before), and she currently has the eighth longest tenure of any member, with Niigaki Risa, Michishige Sayumi, Tanaka Reina, Takahashi Ai, Kamei Eri, Iida Kaori, and Yoshizawa Hitomi being in the group longer.

Her first post-Morning Musume recording, "Nigiyaka na Fuyu", done as a collaboration with Berryz Koubou, appears as the coupling track on Berryz Koubou's November 2005 single "Gag 100 Kaibun Aishitekudasai". Although she continues to appear on television and at live events on behalf of Hello! Project. She also co-hosts two weekly TV shows of her own (Yaguchi Hitori and Kanrui! Jikuu Times), has starred in two dramas, and frequently guest stars on other variety shows.

This new focus on television prompted Yaguchi, during an interview with actor Hugh Jackman, to jokingly describe herself as a "variety idol". Although she later regretted the joke — because she has tried to distance herself from her idol image — the nickname has stuck amongst her fans. At the start of 2007, she has started to sing during Hello! Project concerts again.

Yaguchi was the drama queen in a Japanese drama series called Sento no Musume'. Yaguchi was also one of the main stars in a Japanese day time drama series called Gyarusa along with her show Yaguchi Hitori, and MCing Hello! Project concerts. From May 25, 2007 and up to June 6, 2007, Yaguchi performed in "Damn Yankees", a popular 1955 Broadway musical at the Tokyo Aoyama Theater.

In the summer of 2007, Yaguchi was casted to host a new Gyao TV show, "Midtown TV", becoming her third T.V.-show on air. "Midtown TV" airs all weekdays and Yaguchi hosted it on Thursdays. Also, Mari and seven H!P Eggs are scheduled to appear live and with audience on "Ciao TV", a Kids Station show, on 09/02, 19h~19.30h, on what appears to be yet another TV show. With that commencing, Yaguchi will be in four TV shows being aired simultaneously.

Yaguchi Mari participated in the Minna no Fitness event on April 27. Minna no Fitness is a free internet workout. When asked about the comebacks of former Hello!Project members Goto Maki and Kago Ai, she replied that she hasn’t been in contact with them and doesn’t know any of the details.

It was announced on October 19, 2008, on the official Hello!Project website, that Yaguchi will graduate from the Elder Club & Hello!Project all together on March 31st, 2009.

Yaguchi Mari's debut solo single is a collaboration with the TV show Quiz Hexagon, which has brought us the popular groups Pabo and Shuchishin. This will be the first solo release from Mari. The single is also a collaboration with Airband, and includes a randomly chosen photo card of either Mari or Airband. In December, Yaguchi became a member of Dream Morning Musume.

Yaguchi married actor Masaya Nakamura in May 2011. But in 2013, they divorced.