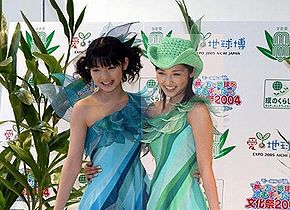 Ecomoni (エコモニ。), is a Hello! Project environmental awareness subgroup that consists of Ishikawa Rika and Michishige Sayumi. Their costumes represent the spirits of the forest (Ishikawa) and the sea (Michishige).

Ecomoni was supposed to be a temporary unit, but have made appearances together from time to time to promote various environmental festivals and events.

Ecomoni was created for the environmental festival "Acchi Chikyuu wo Samasunda!" (Cool Down the Hot Earth!), a two-day event which took place on the 19th and 20th of June 2004. At the festival they sang their song Help!! ~Ecomoni no Acchi Chikyuu wo Samasunda!~. The song, which was written and composed by Tsunku, hasn't been released as a single but appeared on a DVD available for purchase at the Festival and on the compilation album Petit Best 5. A new version sung with Morning Musume appeared on Petit Best 6.

Ecomoni was originally supposed to have disbanded after the festival during a ceremony to switch off the Tokyo Tower lights, however Koike Yuriko, Japan's Minister of the Environment, personally requested that they continue.

At the end of 2004, they appeared in the fourth Hamtaro film as Ecohamzu, and recorded the theme tune with co-star Matsuura Aya.

Ecomoni made a number of appearances on the TV show Oha Star in July of 2004 and again from October 2004 to January 2005.

In 2005, Ecomoni and the whole Hello! Project became involved with the Japanese Ministry of the Environment's "Team Minus 6%" campaign to reduce Japan's greenhouse gas emissions to a level of 6% below the level of 1990 by 2012. They appeared with Minister Koike at the British Embassy in Japan on the 7th April 2005 to promote the event.

While not an Ecomoni product, the girls released a joint photobook, Angels, on 2005-11-16. amazon.co.jp YesAsia

In Yokohama on the 16th and 17th of September 2006, Ecomoni and Morning Musume campaigned against global warming.

In 2007 they appeared at another environmental event along with Morning Musume, v-u-den, Berryz Koubou and °C-ute.