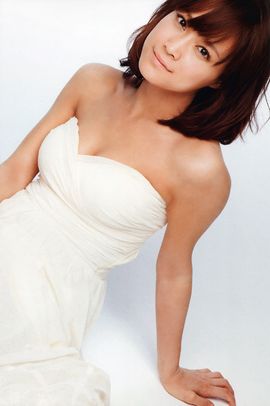 Kamei Eri (亀井絵里) was a Japanese pop singer and idol managed by Up-Front Agency and part of Hello! Project. She was a sixth generation member of Morning Musume.

Kamei Eri was selected from the Morning Musume LOVE Audition 2002 to join Morning Musume as part of the sixth generation, along with Michishige Sayumi and Tanaka Reina. She made her debut on the single Shabondama, was first featured on the Ai no Dai 6 Kan album, and made her first concert appearance at the Morning Musume Concert Tour 2003 Haru "Non Stop!" concert.

She was placed in Morning Musume Sakuragumi in January 2003 and released two singles as a part of the group before it went inactive.

Initially, Kamei struggled the most out of the sixth generation to create a presence for herself. She got her big break playing the role of field reporter Elizabeth Kyamei on the HelloPro News segment on Hello! Morning, showing her comedic side and breaking her out of her shell.

She has since tackled a number of comedic roles, with notable favorites like her parody of Yon-sama (Korean actor Bae Yong Jun). She even got her own corner on the revised HelloPro Hour corner as salesman Eric Kamezou in "Eric Kamezou no Maido Ari."

On August 8, 2010, it was announced on Tsunku's blog that Junjun, Linlin, and Kamei Eri would graduate from Morning Musume.

On December 15th, 2010, Eri, along with fellow members Linlin and Junjun, graduated from Morning Musume and Hello! Project on the final date of their autumn Rival Survival tour. The concert, held at Yokohama Arena, was broadcast live in 3D.