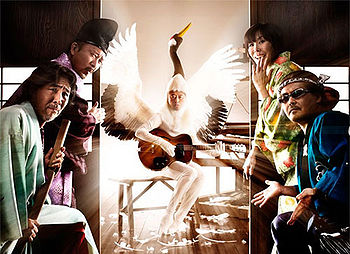 Southern All Stars for their 30th Anniversary (2008)

Southern All Stars (サザンオールスターズ), also known as SAS and Sazan, is a Japanese rock band led by Kuwata Keisuke. The band is considered one of the most influential groups in Japan, being the 4th best-selling artist and having sold more than 47,083,000 copies in Japan.

The band's roots trace back to 1975, when Kuwata Keisuke was part of a popular group Better Days. The group saw many changes to its name and members. It was when keyboardist Hara Yuko and bassist Sekiguchi Kazuyuki joined the group that it had a permanent name.

In 1980, they started the "Five Rock Show" and released their 3rd album Tiny Bubbles. With the release of NUDE MAN and a couple of singles, they experienced more success when popular Japanese artists began covering their hit songs. After releasing their 14th single Chako no Kaigan Monogatari, Kuwata married Hara and to add to the happiness, fans were invited to their wedding ceremony.

The group then released Ninkimono de Ikou, which had a more adult feel in it. With the release of this album, Southern All Stars built up a more definite reputation in the Japanese music world. In the late 1980s, Hara conceived to Kuwata's child, so the leader decided to temporarily suspend the band's activities, while he work on another band, Kuwata Band.

In the 1990's they released more hit songs and album. 1991 also saw the graduation of bassist Sekiguchi Kazuyuki because of health problems, later coming back in 1995. In 1992, they released the singles Namida no Kiss and Shulaba★La★Bamba on the same day. Namida no Kiss became an instant hit, being their first million-seller single. With the release of million-seller singles, the band released Young Love, their 11th album, which has become their most successful album to date.

January of 2000 saw the release of TSUNAMI, which was #1 on the Oricon charts for 5 weeks, selling almost 3 million copies. The single was marked the 3rd best-selling one in Japan. In 2001, guitarist Omori Takashi graduated from the group to take a rest. After releasing some more hit singles and albums, Kuwata came back to his solo activities and produced big hit singles and an album.

Their 13th album, Killer Street, was released in late 2005. The album not only topped the Oricon weekly charts, but also the United World Charts.

In August 2008, the band celebrated their 30th anniversary with the single I AM YOUR SINGER.