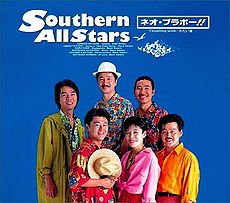 "Neo Bravo!!" is the 29th single released by Southern All Stars. It was released in two formats, 8cm CD and cassette. The title track was used as ending theme song for the TV show NEWS23. The single reached #1 on Oricon charts, becoming their second #1 single, charted for 23 weeks, and sold 413,260 copies in 1991, becoming the #24 single of that year.