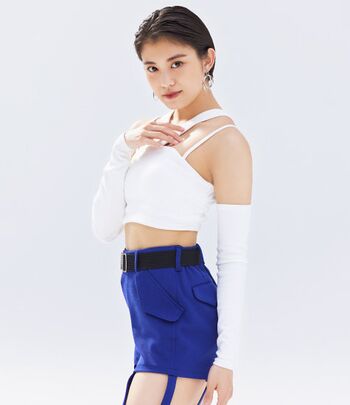 Kishimoto Yumeno (岸本ゆめの) is a Japanese pop singer and idol managed by Up-Front Promotion and part of Hello! Project. She is a member of Tsubaki Factory.

Kishimoto Yumeno was under the agency NAC as a child actress prior to trying out for the "Morning Musume 11th Generation ~Suppin Utahime~" audition, where she became a finalist but failed to pass. She was later introduced as a new Hello! Pro Kenshuusei at the December "Hello Pro Kenshuusei Happyoukai 2012 ~12gatsu no Nama Tamago Show!~" concert.

On April 29, 2015 she was revealed to be one of six members in a new group, named Tsubaki Factory. The unit consisted entirely of Hello! Pro Kenshuusei, including Ogata Risa, Yamagishi Riko, Niinuma Kisora, Tanimoto Ami, and Asakura Kiki.