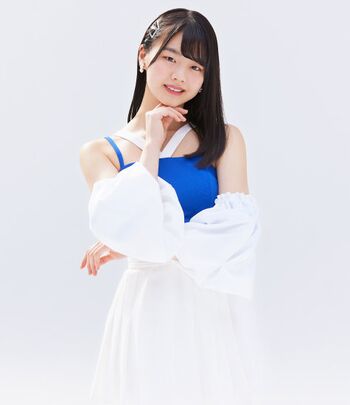 Fukuda Marine (福田真琳, also written Fukuda Marin) is a Japanese pop singer and idol managed by Up-Front Promotion and part of Hello! Project. She is a member of Tsubaki Factory

Fukuda Marine was announced to be a winner of the Hello! Project "Juice=Juice" "Tsubaki Factory" Goudou Shin Member Audition in a surprise reveal during episode #383 of Hello! Project Station. She would join Tsubaki Factory alongside fellow audition winners Kasai Yuumi and Yagi Shiori, as well as Hello Pro Kenshuusei member Yofu Runo. Their activities with the group began at the Hello! Project 2021 Summer Sapphire & Ruby concerts starting July 17.