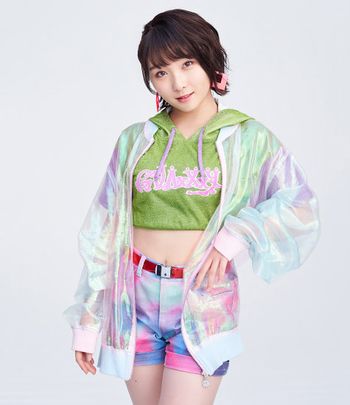 Takase Kurumi (高瀬くるみ) is a Japanese pop singer and idol managed by Up-Front Promotion and part of Hello! Project. She is the Leader of Ame no Mori Kawa Umi and a member of the collective group BEYOOOOONDS.

Takase Kurumi joined the local idol group Tochiotome25 in 2011 and was a member for three years until her graduation on June 30, 2014. The following year in February 26, 2015 she was revealed as a new member of the Hello Pro Kenshuusei through an online announcement, and was publicly introduced the following month at the "Hello! Pro Kenshuusei Happyoukai 2015 ~March no Nama Tamago Show!~" concert.

On May 5, 2017 an announcement was made at the end of the "Hello! Project Kenshuusei Happyoukai 2017 ~Haru no Koukai Jitsuryoku Shindan Test~" event revealing that Hello Pro Kenshuusei members Takase Kurumi and Kiyono Momohime would debut in an unspecified new section that would focus on theater and performance, with no further information provided at the time. In a June 10th article for the release of the Hello Pro Maruwakari BOOK 2017 SUMMER, it was revealed that Takase and Kiyono and another unassigned Kenshuusei were promoted to full members of Hello! Project, though their official profiles remained within the Hello Pro Kenshuusei section and they continued to participate in Kenshuusei events.

An update to the status of two previously announced new groups was published through the official website on March 30, 2018. The notice revealed that the groups would begin activities between Summer and Autumn 2018 and the new group Takase and Kiyono would become members of would have joint activities with the group Ichioka Reina would lead. New information on their respective concepts was also shared; Takase and Kiyono's group would be formed with the image of a small theater troupe that utlizes expressive power and elements of theater and comedy with their singing and dancing. In addition, new auditions for the groups were also announced with applicant information to be revealed in late April 2018, and a note that members could be chosen from both public applicants and members of Hello Pro Kenshuusei.

A special Hello! Station webshow episode uploaded on October 19, 2018 revealed the names of both new groups and the appointment of Takase to the position of leader of her group, Ame no Mori Kawa Umi.