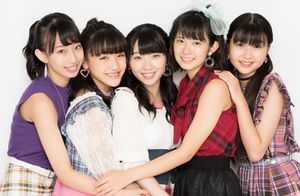 Ame no Mori Kawa Umi was initially formed on May 5, 2017 when a surprise announcement was made at the "Hello! Project Kenshuusei Happyoukai 2017 ~Haru no Koukai Jitsuryoku Shindan Test~" event stating that Hello Pro Kenshuusei members Takase Kurumi and Kiyono Momohime would later debut in a new section focused on theater and performance, with no further information. At the same time, it was revealed that Ichioka Reina would also debut, later being assigned the position of leader in a new unit that would eventually become sister group CHICA#TETSU. A notice published on March 30, 2018 through the official Hello! Project website revealed that the two groups would begin activities between summer and autumn 2018, and announced the "Hello! Project "ONLY YOU" Audition" from which those who pass could join either group. Several months later on June 9, 2018, three additional members from the Hello Pro Kenshuusei were added in a surprise reveal at the "Hello! Project Kenshuusei Happyoukai 2018 6gatsu ~Niji~" event in Tokyo; Maeda Kokoro, Yamazaki Yuhane, and Okamura Minami.

The name of the group was unveiled on October 19, 2018 in a special Hello! Station web-show episode, where it was explained that Ame no Mori Kawa Umi was created to represent the idea behind "rain falling over a forest, leaving water on the leaves that falls into a river that runs to the ocean"; of "nature" and water being "the source of life". Various elements of nature, such as walnut (るみ), rice field (田), mountain (山), feather (羽), hill (岡), wave (波), and peach (桃), were also found within the characters of the member's names. They are a group that aims to enrich the hearts and minds of many people. The official abbreviation for the name was also shown to be RFRO, stemming from the translation of the characters in the Japanese name (Rain Forest River Ocean). In addition, Takase Kurumi was named leader of the group.

Within the same announcement, it was revealed that both Ame no Mori Kawa Umi and sister group CHICA#TETSU, along with the yet to be announced audition winners, would come together to form a larger unit called BEYOOOOONDS (ビヨーンズ). The combined unit name has it's origins in the English word "beyond", meaning "to the other side of". The name was chosen with the feeling of wanting them to grow freely into the future.