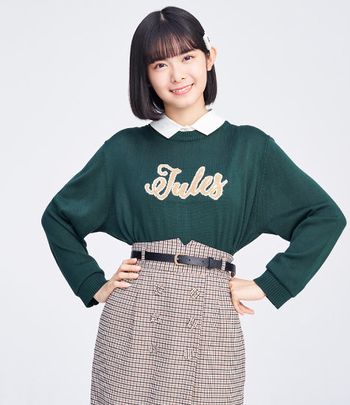 Yamazaki Yuhane (山﨑夢羽) is a Japanese pop singer and idol managed by Up-Front Promotion and part of Hello! Project. She is a member of Ame no Mori Kawa Umi and the collective group BEYOOOOONDS.

Yamazaki Yuhane participated in a Ciao Girl audition in 2011, and attended vocal and dance lessons through studioFX. She appeared in the Kids Vocal Stage event held by J-ACADEMY as part of a duo called A-mero on January 2, 2016. Several months later on March 20th A-mero performed for a second time at the J-ACADEMY IDOL&VOCAL LIVE event. The same year Yamazaki participated in the "Morning Musume '16 Shinseiki Audition", but failed to pass.

Yamazaki was first announced as a member of Hello Pro Kenshuusei through the official website on August 17, 2016, alongside Kawamura Ayano, Yokoyama Reina, Yoshida Marie, Nishida Shiori, and Hashisako Rin. She made her first live appearance at "Hello! Project Kenshuusei Happyoukai 2016 9gatsu ~SINGING!~" on September 4th. The following year Yamazaki was awarded the Judges Singing Award at the "Hello! Project Kenshuusei Happyoukai 2017 ~Haru no Koukai Jitsuryoku Shindan Test~" event on May 5, 2017, for her performance of "Magic of Love" by Taiyou to Ciscomoon.

On June 9, 2018 during the "Hello! Project Kenshuusei Happyoukai 2018 6gatsu ~Niji~" event in Tokyo, it was announced that Yamazaki would join one of two upcoming groups, featuring previously announced members Takase Kurumi and Kiyono Momohime, along with Maeda Kokoro and Okamura Minami. The group would be unveiled at a later date in 2018.