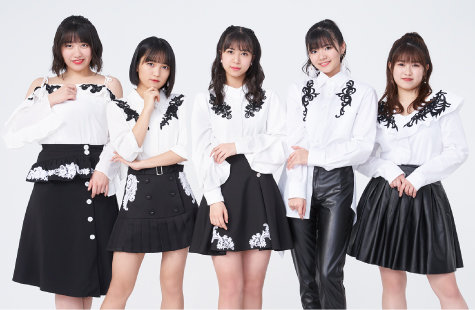 Members (at the Time of Disbandment)

Kobushi Factory was formed on January 2, 2015 at the Hello! Project 2015 WINTER ~DANCE MODE!~ concert where it was announced that their group name would be declared later in January and an indie single would be released in March. The member lineup was revealed to consist entirely of trainees from Hello! Pro Kenshuusei; Fujii Rio, Hirose Ayaka, Nomura Minami, Ogawa Rena, Hamaura Ayano, Taguchi Natsumi, and Inoue Rei.

The announcement of the group name was delayed until February 25, 2015 when it was revealed to be Kobushi Factory. The group's name embodies several meanings; the elegance of the Japanese kobushi magnolia blossom, which itself signifies welcome, friendship, and trust in floriography, and the strength symbolized by a clenched fist (握りこぶし; nigirikobushi). "Factory" represents the inheriting of the spirit of senior group Berryz Kobo as they go on indefinite hiatus, and the members wish to become a close, long-lasting unit just like them. At the time of the announcement it was also disclosed that Berryz Kobo member and Captain, Shimizu Saki, participated in the choosing of the name as her first official task acting in her role as Hello! Project Advisor.

The group's first indie single was simultaneously advertised with the name, to be released and sold as a venue only exlusive during the "Week End Survivor" stage play in which each member was to participate, beginning in March 2015.

At the March 8, 2015 "Hello! Pro Kenshuusei Happyoukai 2015 ~March no Nama Tamago Show!~" concert it was announced that Hirose Ayaka and Fujii Rio would be the respective leader and sub-leader of Kobushi Factory. Three months later on June 2, 2015 at the "Hello! Pro Kenshuusei Happyoukai 2015 ~June no Nama Tamago Show!~" concert the group's major debut single was revealed in a surprise announcement, to be released in autumn 2015.

On May 12, 2017 sub-leader Fujii Rio announced her graduation from both Kobushi Factory and Hello! Project, to take place during the Hello! Project 2017 SUMMER concert tour, citing her goal of devoting herself to her studies in order to become a teacher or a nurse. The exact date of her graduation was later revealed to be the tour finale on September 2, 2017; also the date of Kobushi Factory's major debut. However, it was revealed that Fujii Rio was dismissed from the group early on July 6, 2017 after an official notice was posted to the Hello! Project website announcing the termination of her contract due to discovery of a breach in rules and a failure to comply, the company noting the decision was made after discussions with her family.

An announcement was published to the official website on July 13, 2017 stating that Kobushi Factory member Ogawa Rena would be on hiatus from all activities until mid-August due to health concerns regarding anxiety. Though on September 6th, it was announced that she had decided to graduate from the group and Hello! Project after consulting with her doctors and her condition showing little improvement. She noted her desire to not be a burden on her group, and stated her hopes that fans would remember her and welcome her into becoming a fan herself.

Another sudden announcement was released through the official website on December 6, 2017, alerting to the termination of Taguchi Natsumi's contract and her removal from Kobushi Factory. The announcement stated that the decision was made after discussions with herself and her family regarding her behavior over the course of several months beforehand. The announcement included a message from Hirose Ayaka, the leader of the group, wherein she expressed her disappointment and frustration with the situation and stated that as the leader she felt responsible for the trouble with several members over the previous few months. Her letter also noted that the remaining five members would continue to reach for their goals, and with this new start would deepen their friendship and trust in one another.

The disbandment of the group was suddenly announced on January 8, 2020 through the official website. The announcement stated that Hirose Ayaka had been in talks about her graduation since early 2019, and after lengthy discussions with the rest of the members they together came to the conclusion of disbanding as everyone decided to follow their own chosen path. The final single is to be released on March 4th, with their final live show taking place on March 30th at Tokyo Dome City Hall.

After graduating from Hello! Project, Hirose Ayaka plans to attend music college starting in April, with the aim of becoming a soloist. Nomura Minami will concentrate on acting, and Hamaura Ayano will aim for modeling and acting, also mentioning that in the future she may continue to utilize music in some small way. Wada Sakurako will graduate from Hello! Project and retire from the entertainment industry. Inoue Rei will continue as a member of Hello! Project in an as-of-yet unknown role. The members concluded their statements by thanking the fans for the constant support over the past five years and for continuing to support them until the end.