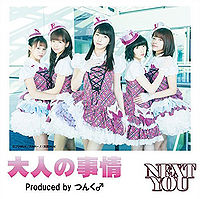 "Otona no Jijou" is a digital single released by Juice=Juice as NEXT YOU. It was used as an insert song for the dorama Budokan in which they starred and performed as NEXT YOU.