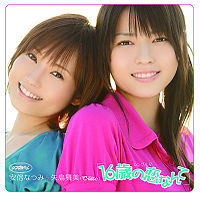 "16sai no Koi Nante" is a collaboration single released by Abe Natsumi and Yajima Maimi. The single was released in both limited and regular editions; the limited coming with a booklet. The first press of the regular edition came with a photo card. The single reached #9 on the Oricon charts and charted for four weeks, selling 14,538 copies.

For the release of this single, the title track was chosen by fans' votes in an poll that lasted from November 28 to December 5, 2007. On the site, samples of both tracks were released, and it was announced that both songs were composed by KAN. The voting was done via mobile phones. "16sai no Koi Nante" won the poll with 5,094 votes, while "Watashi no Koibito na no ni" had 2,861 votes. The "Special End Roll" in the Single V credits the names of the voters.

There are currently two versions of "16sai no Koi Nante" to be found in Abe Natsumi, Yajima Maimi, and Hello! Project's discography. These versions are: