"Chiisa na Koro Kara" is the sixth single released by JUDY AND MARY. The title track was used as theme song to the film Shimusonzu and it was used ending theme song to the Fuji TV series Rooms. The B-side, "Jitensha" was used as the theme song for the Meiji Seika Poifull Gumibinzu CM. This single is an album cut single from the band's second studio album, Orange Sunshine, which was released two months prior. The B-side " Jitensha" is also from the album. The single reached #37 on the weekly Oricon chart and stayed on the chart for a total of five weeks, selling 39,280 copies. 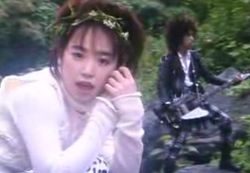 The music video for "Chiisa na Koro Kara" starts out in greyscale with YUKI walking down the street. After the color kicks in it shows the other members quickly and then the video returns to scenes of YUKI near a bus station. The video goes on to show the band members walking around the city. The video then switches to the band playing in a park, with YUKI laying on rocks, while she sings.

The music video is found on the HYPER 90'S JAM TV video as chapter #3 and on JUDY AND MARY ALL CLIPS -JAM COMPLETE VIDEO COLLECTION- on the ALL CLIPS portion as chapter #6.

There are currently three version of "Chiisa na Koro Kara" to be found in JUDY AND MARY's discography.