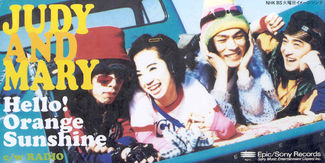 "Hello! Orange Sunshine" is the fourth single released by JUDY AND MARY. The backside of the single contains an alternative cover for the B-side, "RADIO". The band's second studio album, Orange Sunshine, took it's name from the title track. The song was notably sung by Koda Kumi during one of her early audition tapes. The single reached #22 on the weekly Oricon chart and stayed on the chart for a total of nine weeks, selling 98,890 copies.

There is currently two version of "Hello! Orange Sunshine" to be found in JUDY AND MARY's discography.