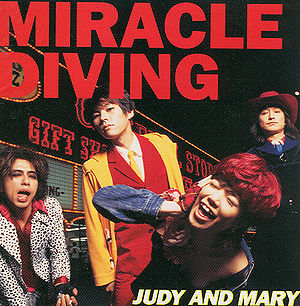 MIRACLE DIVING is the third studio album released by JUDY AND MARY. This album is unique in the sense that only two singles were released leading from the album. Unlike the band's other studio albums this one features two song composed by drummer Igarashi Kohta, while TAKUYA composed four and Onda Yoshihito composed five tracks. This is their last album with Onda creating the majority of the material. The album's cover and jacket were taken in Las Vegas, Nevada, USA[1]. The album reached #2 on the weekly Oricon chart, and stayed on the chart for a total of 35 weeks, selling a total of 939,000 copies. Because of this, the album became the Oricon's #23 best selling album of the year.