"BLUE TEARS" is the second single released by JUDY AND MARY. The title track originally appeared on the band's indie mini-album, BE AMBITIOUS. The song was re-recorded with the band's new guitarist TAKUYA for the single and later placed on their first full-length album, J・A・M. The single is the lead-in for the group's debut album, which was released two months later. This is the only single released by the band to not chart on the weekly Oricon chart. 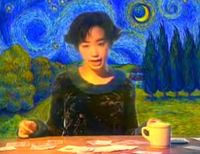 The music video for "BLUE TEARS" was directed by Ohashi Yo and produced by Kotani Koichi. The video starts off with the band sitting in a log cabin, asleep, as the ong starts they each wake up. The video then between YUKI sitting infront of a animated forest, sitting infront of a window with snow falling outside, and walking around the cabin. At the end of the song, the band is shown to be back asleep.

The video is found on JUDY AND MARY ALL CLIPS -JAM COMPLETE VIDEO COLLECTION- video as chapter #2.

There are currently four version of "BLUE TEARS" to be found in JUDY AND MARY's discography. These versions are: