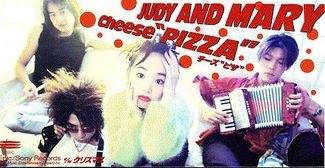 "Cheese "PIZZA"" is the fifth single released by JUDY AND MARY. This is the band's first single to feature a title track composed by the group's guitarist TAKUYA, as well as being the group's first single to enter the Oricon top twenty. Much like the band's previous single, this single contain a cover for each the A-side and B-side. This is the lead-in single to the band's second studio album Orange Sunshine, which was released a month later. The single reached #15 on the weekly Oricon chart and stayed on the chart for a total of eight weeks, selling 77,110 copies. 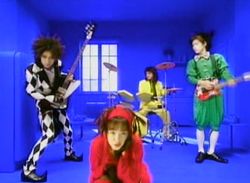 The music video for "Cheese "PIZZA"" starts out with YUKI wearing a bright red outfit walking out into a bright purple room. The then switches to TAKUYA standing in a green room and as he strums his guitar the song begins. The video then continues to go switch between each member playing, the band playing together, and YUKI taking a bubble bath. The video ends with Onda Yoshihito and Igarashi Kohta acting as YUKI's butters waiting for her to get out of the tub and TAKUYA covering up the screen with his hand which reads "DON'T LOOK".

The music video for "Cheese "PIZZA"" is found on the HYPER 90'S JAM TV as chapter #5. The video was later placed on the JUDY AND MARY ALL CLIPS -JAM COMPLETE VIDEO COLLECTION- on the ALL CLIPS portion as chapter #5.

There are currently four versions of "Cheese "PIZZA"" to be found in JUDY AND MARY's discography. These versions appear in the group's discography as so: