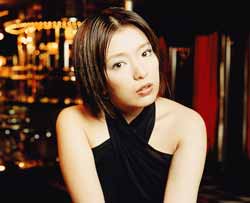 Kominato Miwa (小湊美和) is a Japanese folk singer and was a former member of Taiyou to Ciscomoon. She first left the group after their single Magic of Love in 1999, but later rejoined before DON'T STOP Renaichuu. In 2000 she was part of the Hello! Project shuffle unit Aoiro 7.

She was part of the ASAYAN Sharan Q Audition, the same one Heike Michiyo and the original 5 members of Morning Musume were part of, but had to bow out to give birth to her second child. She was then given a chance in the audition that resulted in her being selected as part of Taiyou to Ciscomoon along with RuRu, Inaba Atsuko, and Shinoda Miho.

She continues to perform to this day, along with her brother in the group PRIEST, a minyo-inspired band. They released their first single, Sotoyama, on August 19, 2003, andtheir first mini-album, Mahora no Tsuki, on July 8, 2006.

As part of PRIEST