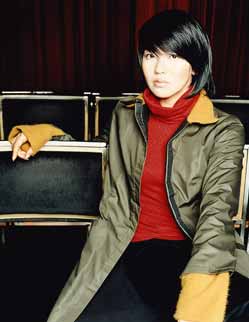 Member of Taiyo to Ciscomoon. In 2000 she was part of Hello! Project shuffle unit Akagumi 4.

While in Hello! Project, she was the oldest member, being a year older than Nakazawa Yuko.

Shinoda is famous in Japan for being a talented gymnast, especially for being the all-Japan champion from 1987 to 1989. She's also famous for competing in the 1988 Summer Olympics in Seoul. She continued to perform while attending the Nippon Sport Science University (日本体育大学), usually placing 3rd in most tournaments until her graduation in 1995. She also showed her talent in her days in Hello! Project, often in live performances while in Taiyo to Ciscomoon and once on Utaban during a jump rope competition with Akagumi 4.

Additionally, Shinoda is a noticed dancer. From 1995 to 1998, she was also a member of "Firegirls", the then-cheerleader dance team for the Yomiuri Giants. She left upon joining the ASAYAN auditions.

Most recently she has worked teaching acrobatics to girls of Hello! Project for their concert performances. She taught gymnastics to the members for their 2015 Summer tour, Hello! Project 2015 SUMMER ~CHALLENGER~.