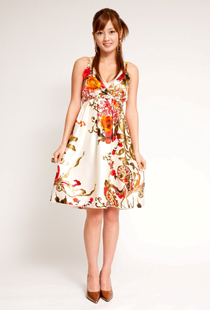 Miyoshi Erika (三好絵梨香) is a Japanese pop singer and actress. She is a former member of the Hello! Project group v-u-den.

Miyoshi Erika first participated in the Nikkan Ultra Idol Duo Audition aired on the TV show ASAYAN in 2002. She made it to the top 19, but was eliminated before the third round.

She was one of the 2003 Hello! Project audition winners. Reportedly she was supposed to debut as a solo artist, however nothing came about and instead she debuted in the group v-u-den, with Ishikawa Rika and Okada Yui. She was also made a member of the Hello! Project kickbase team, Metro Rabbits H.P..

After v-u-den's disbanding, Erika remained within Hello! Project until the mass Elder Club graduation in 2009. Since then she has remained with UP-FRONT AGENCY. In December of 2009, Erika and former v-u-den member Yui briefly reunited to perform two live shows: the "MIYO-YUI no Kyounen mo Futaribocchi Casual Dinner Show" on December 20th and the "MIYO-YUI no Kyounen mo Futaribocchi Special Live" on December 23rd. Many v-u-den songs were featured, as well as some cover songs.

Miyoshi shifted her career's focus from music to acting, taking part in several live stage plays. Among these was the 2011 Morning Musume/Hello! Project musical, "Reborn: Inochi no Audition". She sang as part of the musical's sub-unit, Reborn Eleven.

Early in April 2013 Erika announced her marriage through her blog. She married an IT worker. Miyoshi has stated that she will continue working even after marriage.