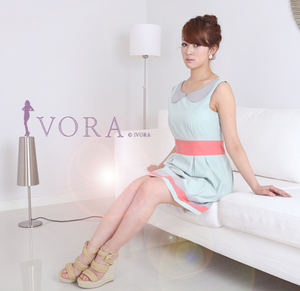 Okada Yui is a former member of the Hello! Project group v-u-den, along with Ishikawa Rika and Miyoshi Erika.

Okada Yui was one of the 2004 Hello! Pro Egg Audition winners. She was most well-known as a memberof the group v-u-den, along with Ishikawa Rika and Miyoshi Erika. Beyond v-u-den, Okada participated in several Hello! Project activities; She was added to the Hello! Project kickbase team Metro Rabbits H.P. in 2006 and was cast, along with her fellow v-u-den members and Matsuura Aya, in the movie Sukeban Deka Codename = Asamiya Saki.

It was announced in January of 2008 that v-u-den would cease activity at the end of their 2008 summer tour. Yui remained in Hello! Project until the entire Elder Club graduated from Hello! Project. Since then, she has performed on occasion with SINA in their mini concerts, and has appeared in a number of concerts/events in the Kansai area.

In December of 2009, Yui and Erika briefly reunited to perform two live shows: the MIYO-YUI no Kyounen mo Futaribocchi Casual Dinner Show on December 20th and the MIYO-YUI no Kyounen mo Futaribocchi Special Live on December 23rd. Many v-u-den songs were featured, as well as some cover songs. On June 23, 2010, she announced her intent to retire from celebrity life to focus on studying beauty and cosmetics. In July of 2011 Yui became a Circuit Lady (racing queen) for Dandelion Racing.

In 2013, Okada would launch the fashion brand "IVORA", as well as model for many of the articles of clothing on sale. Friend and former band-mate Miyoshi Erika endorsed the brand.