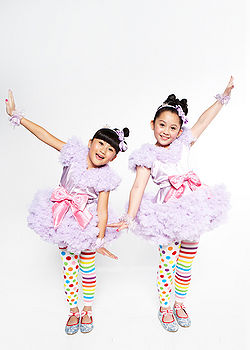 Frances (Wu Zhao Xian) and Aiko (Lan Ai Zi) were the two youngest finalists of the Hello! Pro Taiwan Taiwan NEW STAR auditions where it was decided they were too young to become the winners, however producer Tsunku was impressed at how they entertained the audience. They were later invited to Japan to recieve dance lessons and appear in the Hello! Project winter concerts as backup dancers for Kusumi Koharu who performed "Chance!".

The company's original plan was to train them slowly in dancing and singing, but their debut was pushed forward early due to their ability to learn quickly and bring high ratings on television. On September 8th, 2009 their debut and group name was announced (before that, they were simply known as "Frances & Aiko"). Their first mini-album went on sale on September 15, 2009 in Taiwan. To this date, there is no plan for them to release a Japanese version of their album like Ice Creamusume.

Sometime in May 2012 the group's profile was removed from the Hello! Project website, though they continue to be active in Taiwan.