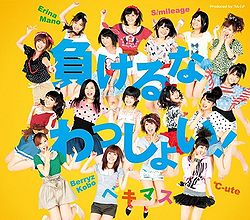 "Makeruna Wasshoi!" is a collaboration single released by Berryz Kobo, °C-ute, Mano Erina, and S/mileage under the name Bekimasu (ベキマス). It was debuted during the Hello! Project 2011 Summer concert tours and released digitally in August. Later in December it was given a physical release as an indie single.

There are currently two versions of "Makeruna Wasshoi!" to be found in Bekimasu and Hello! Project's discography. These versions are: