"NEXT MY SELF" is the sixteenth single (thirteenth major label single) released by Mano Erina. The single was released in limited A, B, C, and regular editions. Limited A and B came with bonus DVDs. The limited editions came with a serial number card which, when entered in a lottery, could win a ticket to one of the single's launch events. A special box set containing all four editions of the single was also released. 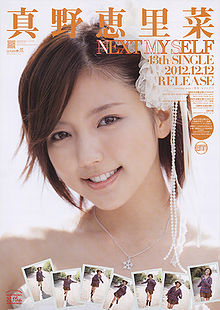 Promo poster for the single

There are currently two versions of "NEXT MY SELF" to be found in Mano Erina and Hello! Project's discography. These versions are: