Difference between revisions of "generasia:Featured article for 2013 week 23" 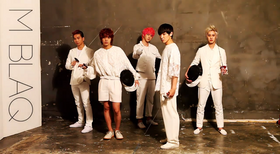 MBLAQ is a Korean pop five member boy group that debuted in 2009. The group was created by the famous Korean singer / actor Rain and are under the singer's own management company J. Tune Entertainment. MBLAQ is an acronym for "Music Boys Live in Absolute Quality". The group debuted in Japan in May 2011 under Sony Music Entertainment. In 2013, the group changed its Japanese label to IVY Records. They are currently prmotiong with five members Seungho, G.O, Joon, Cheon Dung, and Mir.

They debuted in 2009 with the single "JUST BLAQ", one member Cheon Dung, did not participate on the single; he joined the group only 15 days before their debut to replace an unknown fifth member. They made their Japanese debut in 2011 with the single "Your Luv" and reached #2 on the Oricon charts.