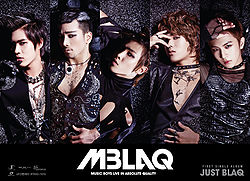 "JUST BLAQ" is the Korean debut single released by MBLAQ. Cheon Dung did not participate on the single; he joined the group only 15 days before their debut to replace Kim Sang Bae, the fifth member that left MBLAQ due health issues. As all the members of the group, including Kim Sang Bae, had already completed their recordings and the group debut was already announced to the press, there was not time for a new recording to be included on the single. Cheon Dung's performances of "Oh Yeah", the lead track, were never lip-synced, instead he tried to match the original rapper' voice tone.